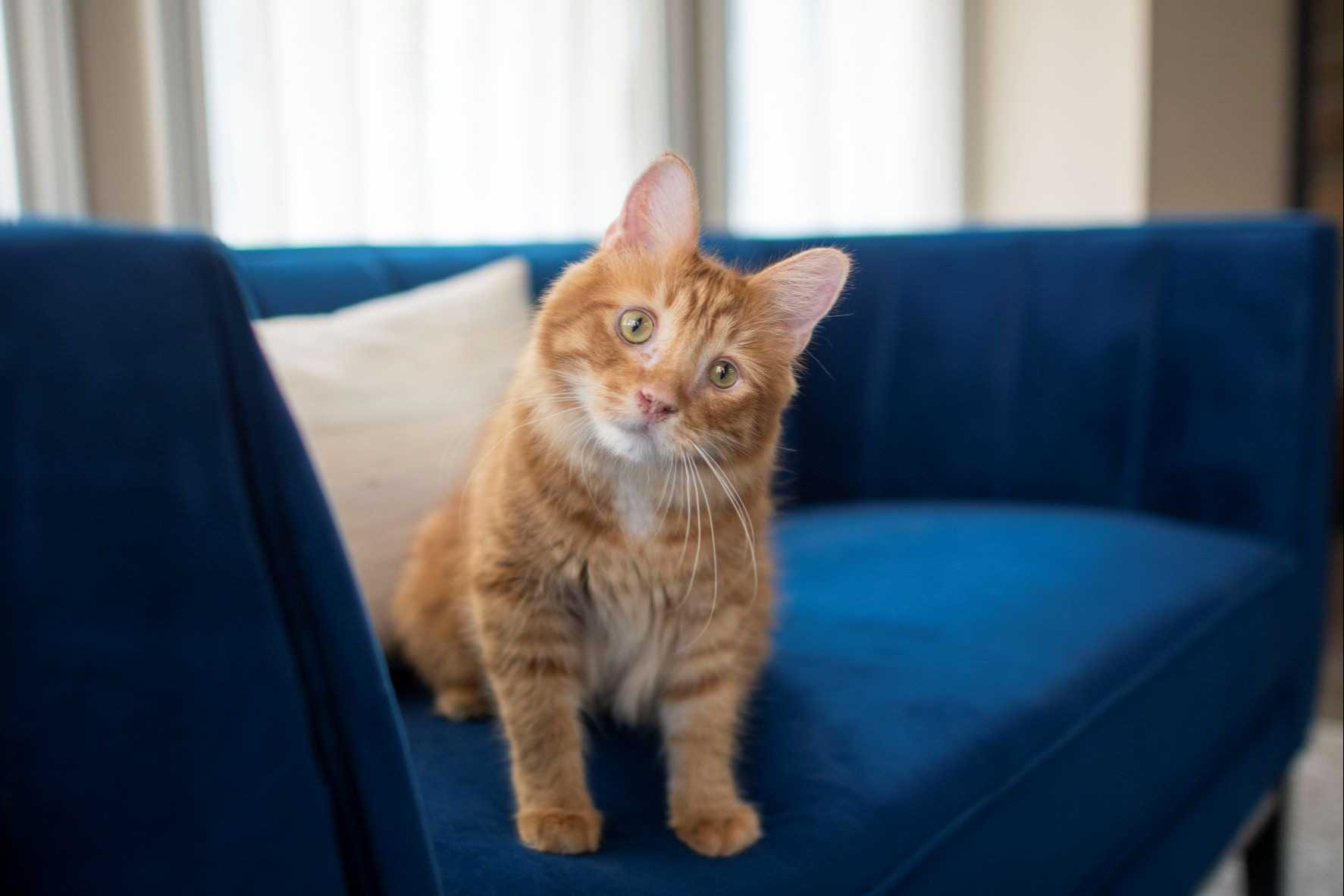 Seeing Larry now, it’s hard to remember just how sick and helpless he was when he first came to the Dumb Friends League San Luis Valley Animal Center in December of 2021. Over the past year, this orange boy with the insurmountable spirit has overcome unimaginable odds, inspiring everyone he meets with his heroic tale and serving as a reminder of all that is possible when people come together to make a difference.

Larry was brought to the League as a tiny and meek 2-month-old stray after a kind member of the Alamosa community rescued him from the middle of a busy road. He was emaciated, cold, and dehydrated, with his eyes matted shut and his nasal passages completely blocked. Anyone could see Larry was suffering greatly, and his prognosis was woefully dire.

As soon as he arrived, our veterinary team diagnosed the young tabby with a chronic upper respiratory infection, severe conjunctivitis, and symblepharon, in addition to malnourishment and extreme dehydration. Symblepharon is an ocular condition, typically caused by trauma or infection, in which the upper and lower eyelids adhere together. In some cases, it can obstruct vision and may interfere with the ability of tears to drain into the nasal cavity, leading to excessive tearing. Treatment for the condition often requires medication or surgery. 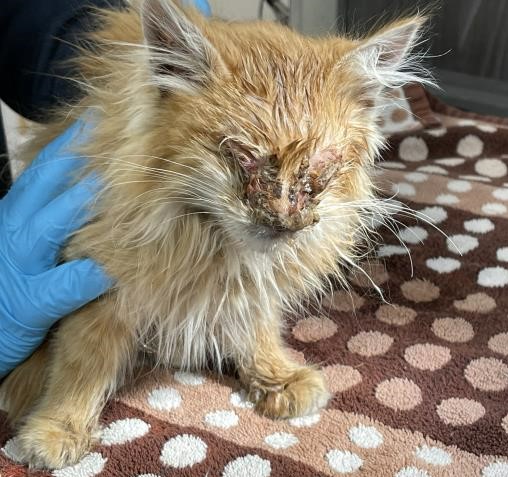 To complicate matters, Larry was also too small and weak to feed himself. For several days, he depended on his newfound caregivers to provide him with nourishment day and night through syringe feedings. Larry’s condition remained touch-and-go for that first week, but luckily his medications began to take effect and he soon regained his appetite and ability to eat on his own. Shortly after, shelter staff felt confident in moving forward and transferred him to the League’s Leslie A. Malone Center in Denver for further treatment and rehabilitation.

Fortunately for Larry, the League is supported by a robust team of over 525 dedicated foster care volunteers who regularly open their homes and hearts for sick and wounded animals in need of specialized care. Larry’s foster parent was coached on his feeding and medication requirements, as well as his follow-up exam schedule at the shelter. But it was the love and safety he received in his foster home that seemed to make the most difference for Larry’s recovery. There, he was able to rest, get his bearings, and regain enough strength to take his next steps. After several weeks of support from his foster parent, Larry’s care team (and devoted fan club) felt he had made remarkable progress; his eyes were healing nicely and he had gained close to two pounds since intake. This sweet survivor was finally ready for adoption!

Meanwhile, former League foster parent Kim Liang was captivated after seeing a photo of Larry on our Volunteer Facebook page. The previous 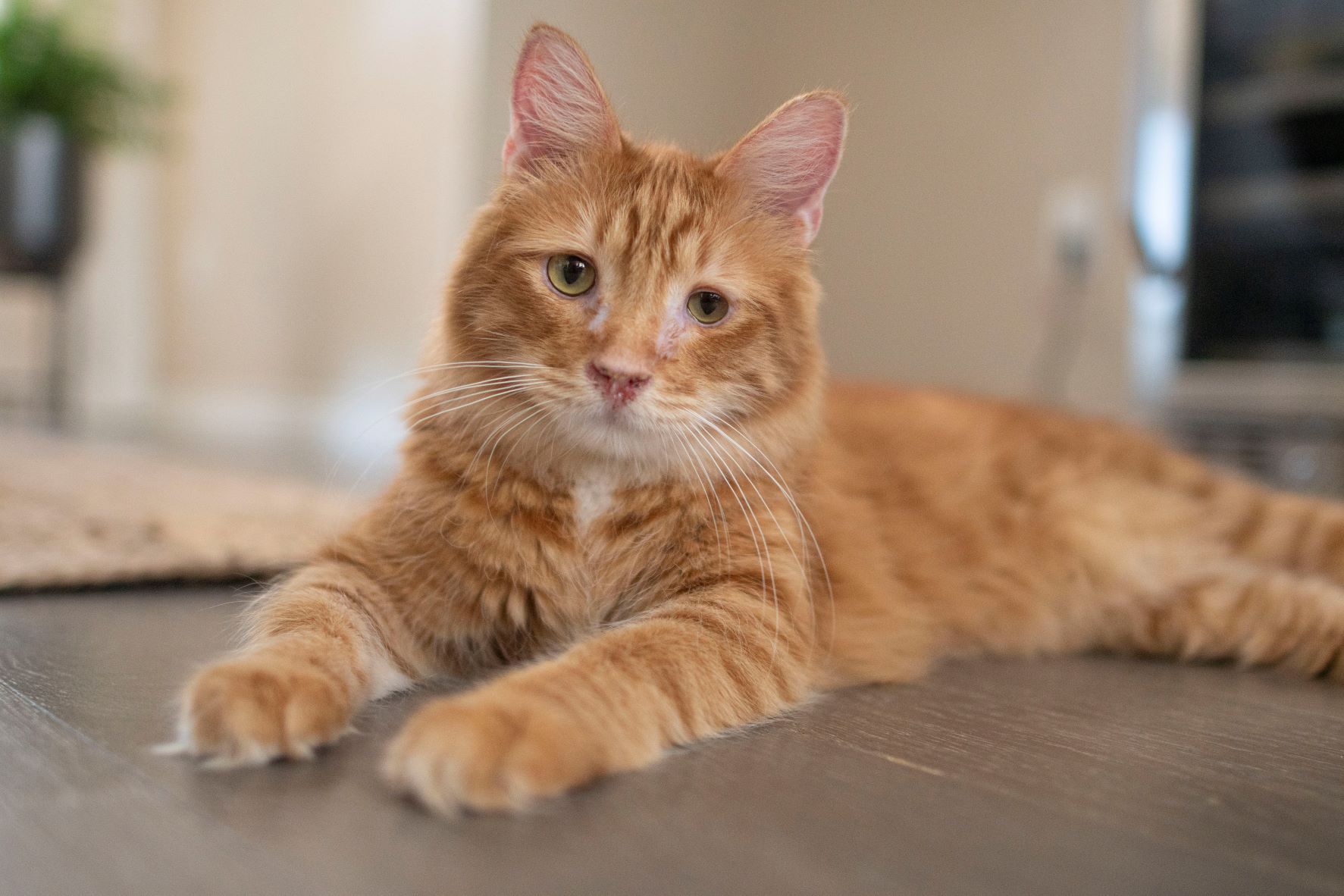 year, Kim adopted Peaches from the League and was considering adding another cat to her family. “I was looking for an orange tabby,” Kim said. Larry couldn’t have asked for a more perfect fit. Today, he is thriving and busy bringing warmth and joy to his new family – which includes Peaches, two other cats, and a dog named Mia. And while his left eye is slightly smaller than his right, his appetite – like his scrappy nature – is larger than life. “He’s definitely grown more into his personality,” says Kim. “He’s sure of himself now … he’s very playful, very curious, [and oh so funny].” After such a rough beginning, it’s wonderful and heartening to see Larry’s star shine bright.

You can make all the difference for animals like Larry by volunteering or donating to the Dumb Friends League. Together, with our compassionate community, we will end pet homelessness and animal suffering.