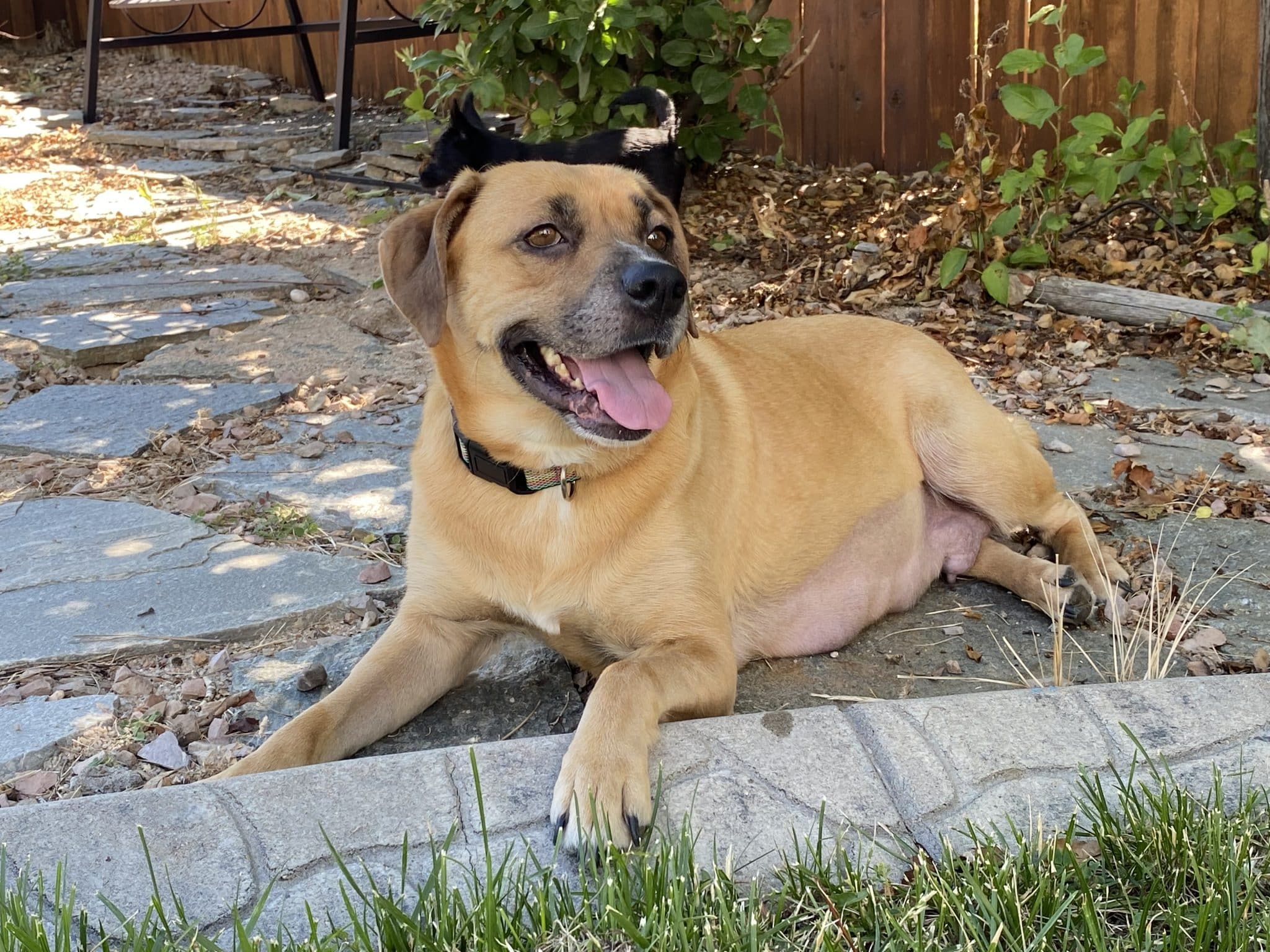 When Sasha – a gentle, unassuming 3-year-old beagle-mix – first came to the Dumb Friends League, it was not yet clear just how extraordinary her life would be. However, in a matter of days, her name became famous within the halls and walls of the League’s Leslie A. Malone Center.

After receiving her initial wellness exam, League veterinarians discovered Sasha was pregnant and advised that she be transferred from the shelter to the care of a foster parent named Lynda. With only days of foster care under her belt, Sasha went into labor and gave birth to her first puppy – a tiny, flourishing male. But her work was far from finished. Things took an alarming turn two hours later when she had yet to deliver another pup. Exhausted and growing desperate, Sasha was taken to an after-hours emergency clinic before returning to the League on Memorial Day for immediate and intensive care.

Because the League was closed for the holiday, Sasha was greeted by a relatively small but determined veterinary services team who quickly determined she was experiencing dystocia (or difficulty giving birth) due to a trapped puppy in her birth canal. As such, she would need to undergo an emergency cesarean section (c-section) as soon as possible.

Given Sasha’s strenuous labor, the likelihood was slim that any additional puppies would survive. Sasha herself was at risk of developing sepsis, a life-threatening condition where infection spreads through the bloodstream. Upon her arrival, our veterinary services team wasted no time sedating her to perform the c-section. But what they encountered during the procedure was nothing short of amazing.

A female dog’s uterus is separated into two separate “horns” where fetuses develop. Judy, the lead veterinary technician who helped with Sasha’s surgery, recently described the condition of Sasha’s first uterine horn. “It basically fell apart. The skin just tore, and so the puppies just started coming out,” she said while recalling the shock and urgency that followed. The veterinary services team had to act swiftly to surgically remove Sasha’s second horn; if it was as tenuous as the one before, it could fatally rupture.

Fortunately, Sasha survived the procedure, and 16 puppies – eight from each horn – were delivered on Memorial Day. And while each pup was alive and well, they needed to be cleaned and warmed immediately. “It was all hands on deck,” Judy said. Typically, the mother will instinctively tend to her young as they’re born, but our staff had to take over for Sasha, who was still under anesthesia. Judy beamed with pride as she remembered how staff members from across the League rushed to Sasha’s side to care for her newborns.

Following the surgery and birth of her puppies, Sasha did not immediately produce milk and needed the help of League staff and volunteers to nourish her sizable brood. Eleven were bottle-fed babies, while the other five went to live at a single foster home where they nursed from a surrogate mama named Sissy. Sissy had recently delivered her own litter of Australian shepherd puppies and tragically lost some in the process. She was truly an unexpected hero in this story.

Meanwhile, Sasha continued to recover in the ICU at the Dumb Friends League. Eventually, her milk came in, and she was reunited with her 11 bottle-fed pups. Sadly, one of these puppies passed away shortly after the reunion, but the remaining 10, along with Sasha, thrived and soon returned to Lynda’s foster home.

From the beginning, Sasha was a protective mama who always wanted to be near her playful puppies. This delight in her wee ones was equally matched by the pride her foster mom felt for her. “She [was] a great mother and super sweet,” said Lynda, adding that Sasha insisted on sitting in the front seat to keep a close eye on her puppies on the ride home from the League. Because the puppies were born on Memorial Day, Lynda named each after a military term or rank. Sasha’s first puppy, who was born in Lynda’s home, is named Spc. Robert L. Nichols – Rob Dog for short – in honor of a close family friend’s nephew who was killed while serving on active duty in Afghanistan.

The powerful bonds formed between Sasha, her pups, Sissy, and their many caregivers helped open the doors to new and happy beginnings. Once the 15 puppies were healthy and old enough to be adopted, each went home to grow alongside a loving family. Sasha was also soon adopted by Marina, who was smitten with her from the start.

But this adoration wasn’t entirely new for Sasha; her remarkable tenacity and resilience left a mark on everyone at the League, including:

Today, Sasha is healthy and living comfortably in her new abode. “She is a loving dog, and I am so lucky to have her,” Marina said. “She is my shadow and sits in on all of my meetings when I’m working from home.”

This Colorado Gives Day, help the Dumb Friends League continue to touch the lives of animals like Sasha and her pups. Please click here to donate today.