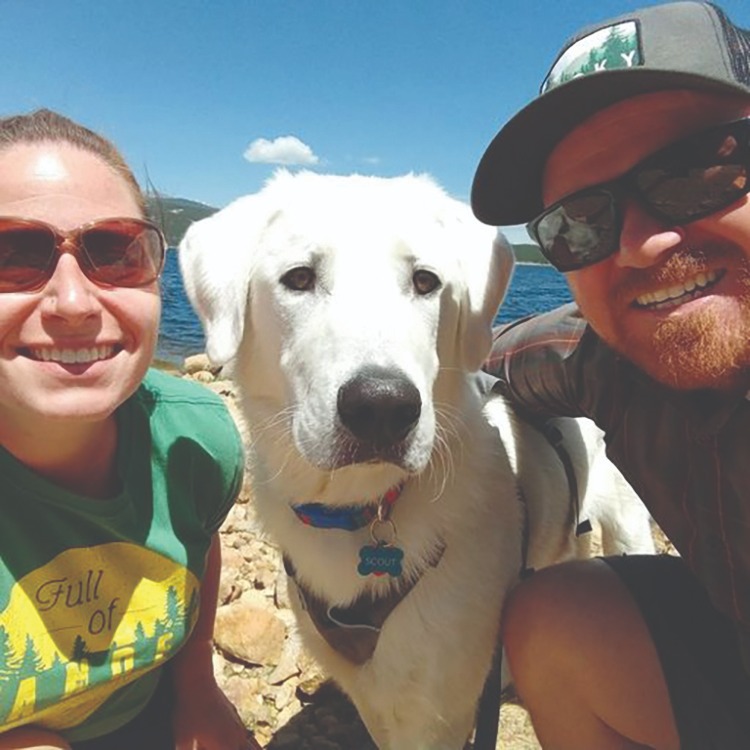 About two months after the nationwide onset of COVID-19, a sweet, but timid, akbash puppy came to the Dumb Friends League in need of a safe and reliably supportive home. Found as a stray in Colorado’s San Luis Valley, Scout was eventually transferred to the care of our Leslie A. Malone Center in Denver. It was clear at once Scout had endured a lot in his short life. With his tail tilted low and near his hindlegs, the large, milky-white pup was noticeably fearful of his new surroundings, particularly buildings and loud noises. Thankfully, Scout seemed to take comfort from being close to people – a trait that would serve him well in the days and years ahead.

Because he tolerated handling so well, our behavioral team rated Scout’s fear at a Level 2 (out of 6), meaning they believed his anxiety could be managed with time and training. Having likely never been socialized, Scout was guarded and wary of novel experiences. Shortly after arriving at our shelter, he was enrolled in Headstart, a supplementary program that provides dogs with behavioral enrichment and support as they wait for adoption. Scout’s walk status was also designated as “advanced,” meaning only staff and volunteers with specialized training could take him for a stroll.

At this point in the pandemic, as social distancing precautions became the new normal, the League was experiencing a significant shortage of volunteers. As such, employees from across the organization stepped up to help care for our animals’ daily needs. Fundraisers filled bowls, directors mucked stalls, and IT gurus provided daily enrichment and attention. It was on a walk around the Friendship Circle when Lauren Pipis, the League’s Associate Manager of Humane Education, fell hard for this nervous, gentle giant.

Lauren sent a photo of Scout to her husband in the hopes he would feel the same way. To her pleasant surprise, her husband’s immediate response was, “Bring him home now!” The couple and their other dog (who has sadly since passed) met with Scout and our Behavior Technicians to determine whether the adoption would be a good fit. They decided to first try a foster-to-adopt approach to see how everyone meshed. Throughout this process, it became crystal clear that Lauren’s home – a quiet house with a dog, cat, and no children – was the perfect place for Scout.

Nearly a week after arriving at our shelter doors, Scout had found the loving family he’d always deserved. When the behavioral team evaluated him shortly before adoption day, he was still a bit tentative, but he was able to walk on a leash, had a loose body posture, and was wagging his tail. He was also continuing to feel at ease with new people, especially his adopters. Lauren was advised to be patient with Scout as he adjusted to his new life, letting him decide when and how to interact. All in all, it took a week for Scout to warm up at home, and about a month for him to come fully out of his shell.

As a humane educator, Lauren saw potential in her new friend right from the start. After a year full of growth, Scout passed an evaluation to become one of the League’s esteemed “Ambassapets,” helping the community learn how to treat all living beings with compassion. Today, he works with Lauren to teach children how to approach new dogs safely and respectfully through some of the very human behaviors that helped him overcome his own fears, including bending at the waist, avoiding direct eye contact, and turning to the side while offering a gentle hand to nudge or sniff. In sessions, Scout is known to have a captivating presence; with him, humane education lessons resonate and come alive.

According to Lauren, Scout now behaves as if his motto is, “the world is my friend!” He has so many admirers, in fact, that Lauren finds it difficult to be true to her introvert nature when Scout is around! In addition to the affection he receives during lessons, Scout adores being with his family, exploring the outdoors, and resting comfortably on nearly every surface he can find.