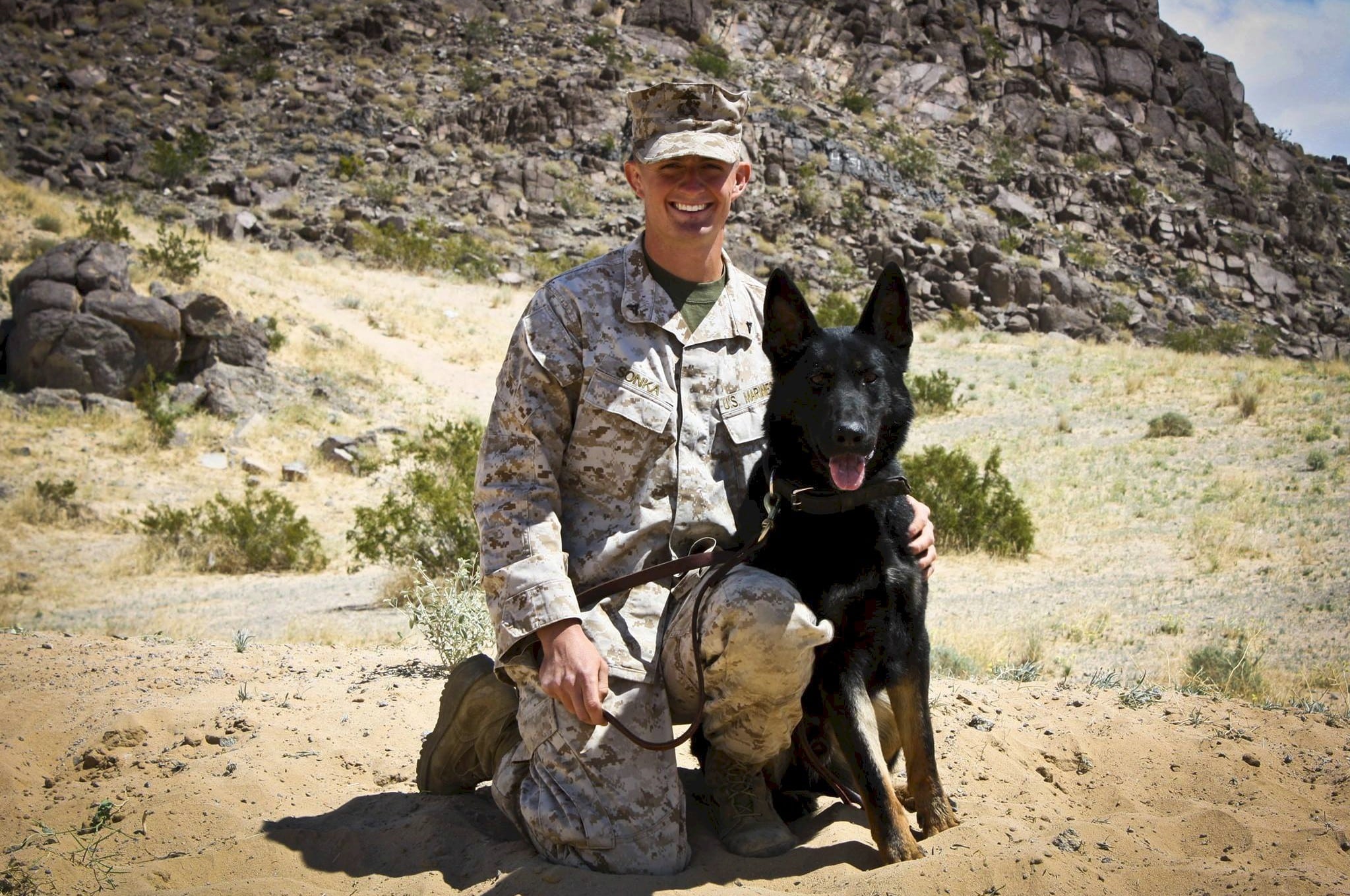 As a Marine and Military Working Dog Handler, Corporal David Sonka approached every day with passion and dedication – for his country, his fellow service members, and his loyal working dogs, Falco and Flex. Sadly, both David and Flex made the ultimate sacrifice in 2013 while serving bravely in Afghanistan. David was just 23 years old. Now, eight years later, their legacy of service and hopeful determination lives on in Glenn, David’s stepfather. In fact, nearly two years ago, Glenn left his job to work for the Dumb Friends League – first as a volunteer and now as an animal care associate – in honor of David’s lifelong love of animals.

Becoming a Marine and K-9 Handler

Like so many, September 11 was a defining moment for young David. The tragic events and patriotism of that day propelled him toward a career in the military, and, in 2007, he enlisted in the Marines just one week after his 18th birthday. After enlisting, David learned more about the roles of military working dogs (also known as MWDs or K-9s) and became interested in becoming a K-9 Handler for the Marine Corps.

With their keen sense of smell and unique sensitivity to human emotions and behavior, dogs have played a vital role in military operations for thousands of years. Today, Handlers in every branch of the armed forces partner and care for specially trained MWDs who assist them with tracking, patrolling, explosive detection, search and rescue, attack, and communication assignments. David received training to become a Patrol Explosive Dog Handler and was quickly matched with his first K-9, Falco, in California when he joined the Third Marine Expeditionary Force. He worked tirelessly with Falco for two years, keeping daily training journals and constantly adapting his handling approach. In fact, he was so invested in Falco that he rarely took a day off, even choosing to sleep in the kennel at night with his loyal companion.

One of David’s favorite training exercises was “grabbing a wrap.” The process involved wrapping his arm in a protective shield to allow Falco to prepare for combat by practicing an attack. To enhance and diversify Falco’s training, David often encouraged his peers to take his place during the activity. Still to this day, “Anyone wanna grab a wrap?” is the phrase David is known and fondly remembered for.

With Falco’s initial training phase behind them, the two were deployed to Afghanistan with a group of other Handler-Dog teams. There, David’s passionate commitment to Falco and their work together only grew stronger. Glenn recalled a memory shared by one of David’s fellow Marine K-9 Handlers. “When [David’s] deployment was done, they had 2-3 days of downtime before their transport out,” said Glenn. “[The fellow Marine] looked out beyond the tarmac and saw someone with a dog in a field. It was David and Falco. David was training Falco on his downtime even though [they had completed their deployment] and were imminently on their way back to the States.”

After being home for seven months, David was nearing the end of his four-year commitment with the Marine Corps. Deciding to wind down his military career meant that he would sadly need to part ways with his beloved Falco (as an MWD, Falco was owned by the Department of Defense.) Falco was eventually transferred to another Handler, who also received David’s thorough training notes. What David didn’t know was that he would soon be called to train and work with another K-9 named Flex.

“He asked about Flex”

Before completing his commitment, David was contacted by the Marine Forces Special Operations Command (MARSOC), which had taken a particular interest in his impressive work ethic and success with Falco. This recognition was a distinguished honor – David knew that nearly 100 military personnel were vying for the opportunity to serve as a MARSOC K-9 Handler. If chosen, he would need to reenlist, undergo highly specialized training with a new dog, and redeploy. David readily accepted the offer when it came in.

After joining MARSOC, David met Flex, a “multi-purpose canine” (or MPC) and his new faithful companion. Like MWDs, MPCs perform explosive detection and patrol tasks, but they also receive specialized training to track, rappel, and swim long distances (up to 2 kilometers). David and Flex partnered in the fall of 2012 and graduated from the MPC training program the following December. They continued their work together for about five months, in which time David made significant progress with a dog who had a reputation as a challenging trainee. “His individual training with his dogs was his own thing,” said Glenn. “He kind of did it in his own way, focusing on positive reinforcement. It worked.”

In late March 2013, David and Flex were deployed with Marine Special Operations Team 8223 to Farah Province, Afghanistan. Just over one month later, while providing overwatch for a meeting between Special Ops Forces and Afghan military personnel, David, Flex, and a fellow Marine, Staff Sergeant Eric Christian, were mortally wounded when an Afghan Army soldier opened fire. While David and Flex’s time together and on this earth was tragically cut short, their heroic service will live long in the hearts of all who knew them. The two also shared a profound and everlasting bond. When asked about David’s final words, the corpsman who worked to save his life shared, “He asked about Flex.”

“Never above you. Never below you. Always beside you.”

This common Marine Corps saying is often used to describe the camaraderie between people who have served in the military, including active service members, veterans, and those who have passed on. But it could just as easily apply to the love David shared with both of his working dogs. Glenn knows firsthand just how important being a K-9 Handler was to his stepson. “If you’re a parent and you lose your child, a lot of parents are transformed by that experience in innumerable ways. One of which, for many parents, is to find a way to honor or carry on what their child wanted to do – what their child was about,” said Glenn.

David’s dedication and admirable work with K-9s has been recognized far and wide: the MARSOC K-9 Training Facility at Camp Lejeune in North Carolina and the USMC CPL David M. Sonka Dog Park in Parker, Colorado, are both named after him. Additionally, his personal decorations include a Marine Corps Achievement Medal, a Marine Corps Good Conduct Medal, a Combat Ribbon, and a Purple Heart. Glenn himself has chosen to refocus his career on animal care at the Dumb Friends League as a beautiful way to honor the memories of David and Flex. “David is the reason that I work at the League, as it is up to us who are still here to live their legacies as best we can and make sure their light still shines,” he said.