Willow's extraordinary will to live 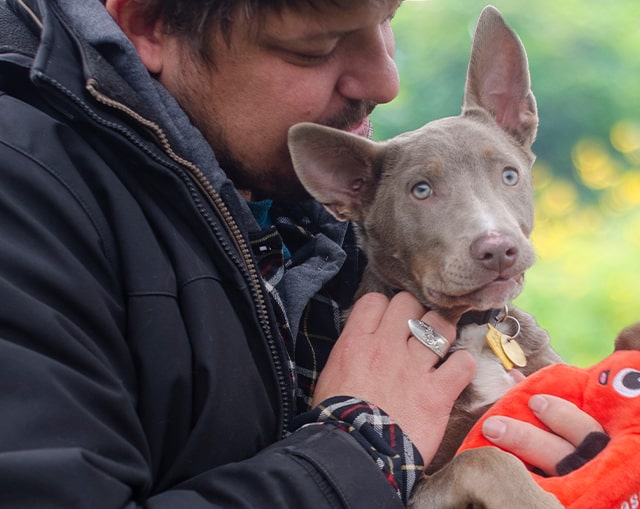 Willow was just hours old when a passerby heard her cries and whimpers coming from a Denver city dumpster. Cold, abandoned, and with her umbilical cord still attached, the tiny puppy was in grave danger. If she was to have any chance of seeing tomorrow, she would need immediate medical attention.

The kindhearted person who found Willow rushed her to the Dumb Friends League, where she received a thorough veterinary wellness exam and a promising prognosis. However, she wasn’t out of the woods yet. Without a mother to nurse her, Willow would need a loving and reliable foster home capable of feeding her from a bottle several times a day.

Inspired by Willow’s story and smitten with her small but mighty spirit, a member of the League’s Veterinary Services Team volunteered for the job. As a foster pup, Willow received the care and loving touch she so desperately needed – and not just from her foster parent. In fact, Willow became quite the familiar face around the League, charming everyone as she snoozed or curiously played behind the foster care desk.

Once her health markedly improved, Willow was ready to move from her foster home to her new family. And when brothers Phil and Ethan saw her photo pop up on the League’s adoption site, it was love at first sight. “[Seeing her picture] … it felt like she was ours before we even got her,” said Phil. After learning how she triumphed over adversity, the two were moved to meet her, remarking how “absolutely tragic” it was to hear about her earliest days.

It turns out that Phil and Ethan were coping with a tragedy of their own. Just two years before, the brothers had lost Hercules, Ethan’s beloved three-legged pit bull. The loss of Hercules was devastating, and both Phil and Ethan had been grieving for some time when they decided they were finally ready to bring a new dog into their lives. “[Hercules] definitely left a huge void, so [Willow] has really helped with that,” Ethan said.

Today, Willow can be found trekking through the mountains or sleeping comfortably in her new favorite spot – on Phil’s or Ethan’s chest, where she knows she’s safe. She also loves to play shadow with Phil’s other dog, a distinguished adult Lab more than twice her size. “She’s never alone,” Phil said – a far cry from the loneliness she experienced as a newborn left for dead at the bottom of a dumpster. Though small in stature, Willow is also fearless, perhaps because she has already beaten the odds. She seems to know her best days are still ahead.

“[Willow’s] absolutely spoiled. She’s gorgeous and very energetic – and she knows she’s loved,” said Phil. Please help the League continue to touch the lives of animals like Willow by supporting our mission to end pet homelessness and animal suffering.