Forever in our hearts, Andy finally found his forever family 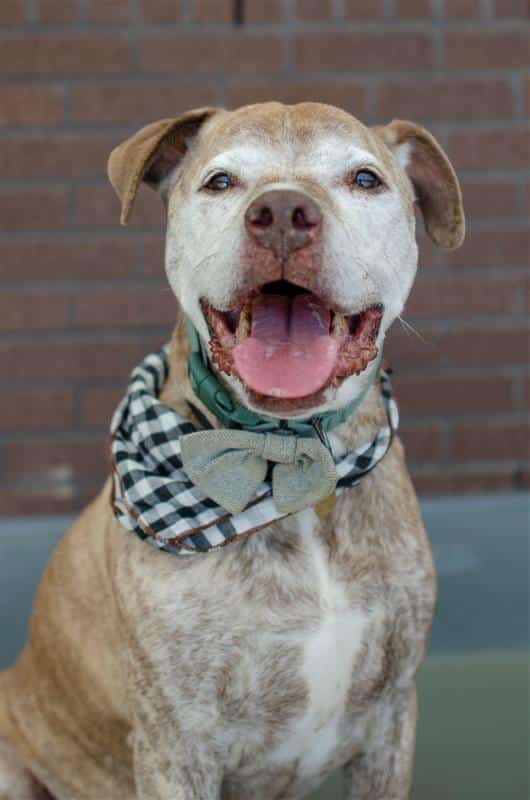 By now, you’ve probably heard of Andy, the lovable 9-year-old pit bull who spent six months at the Dumb Friends League before being adopted in November. Perhaps you caught one of his many TV appearances or saw how our humane education students lovingly covered his kennel with their artwork and poems. “My name is Andy, and I am in fact your new best friend … I hope your home can soon be mine,” one child wrote to encourage potential adopters, while another penned, “Andy! Andy! Andy! You can’t get enough of me!”

The truth is everyone who met Andy fell head over heels for him, which is what made his extended stay at the League so perplexing. How could anyone be missing out on a life of pure love with this sweetheart of gold? Sure, he presented some challenges; for example, he didn’t get along with other animals and tended to bark. But those paled in comparison to his countless virtues.

Thankfully, things began to look up for Andy late last month when a couple of our TikTok videos (@dumbfriendsleague) went viral. One TikTok capture of Andy – set to the stylings of Adele singing, “Easy on Me” – moved people to tears. Another garnered nearly 6 million views after our followers commented on and shared the video with their social networks. Our boy had hit the big time, achieving levels of stardom never before seen at the Dumb Friends League.

However, in our eyes, Andy was always a shining star. Long before he was melting millions of hearts, he was raising our spirits during League meetings and charming us with his gentle nature. If you’ve watched his famous TikTok videos, then you know Andy’s favorite activity was riding in the car. Whenever we took him for a spin, it was difficult not to feel overcome with joy. For nearly half a year, his happiness was our happiness.

As much as Andy loved his days with us, it was clear that he longed for a home to call his own.

For months, we hoped that each day would be the day Andy would meet his future family. But, when that wonderful day finally came, it was a bittersweet moment for the many League employees and volunteers he touched during his stay. On a brisk Saturday morning just before Thanksgiving, the Norris family came through our doors with Andy in mind. They had seen him on TikTok and felt compelled to meet him in person.

Word soon spread throughout the shelter that Andy had a whole family of admirers eager to make his acquaintance. Andy seemed to know, too. When he and the Norrises first saw each other in the consultation room, sparks and snuggles flew. The family was in awe of the dog they had fallen in love with on-screen. The connection they felt was even better than they could have imagined!

As the Norris family and Andy left the League together, there wasn’t a dry eye in sight. Those who knew the beloved pup said their heartfelt farewells as other patrons from the community stopped to experience the magic of the moment. Andy was getting the ending (and beginning) he always deserved – riding off into the sunset with his loving companions, just in time for the holidays.

“We are just planning on loving this little guy forever,” said Amanda Norris, one of his adopters. “He is the sweetest … we’re so lucky to have him!”

Thank you so much for your outpouring of love and support for Andy. You helped make his adoption possible. We hope you’ll stay tuned for additional updates on his exciting new adventures with his loving family. To help others like him, please consider donating to the Dumb Friends League this holiday season.