How Pedro the donkey became a lovebug 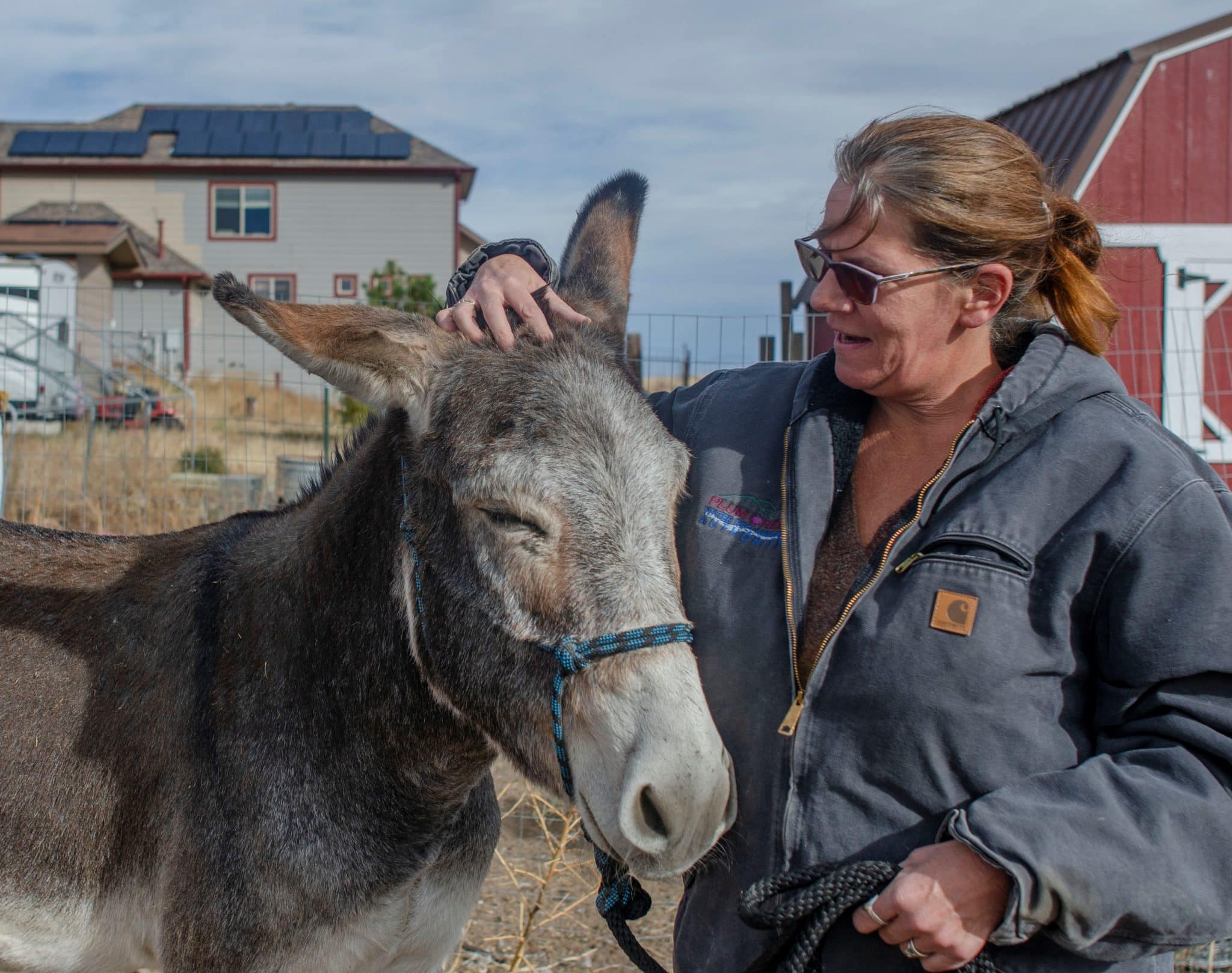 When Pedro first came to the Dumb Friends League Harmony Equine Center, he had scars on his body consistent with rope and wire burns, as well as severely overgrown hooves that impeded his mobility. The 4-year-old donkey – neglected, malnourished, and fearful – had been seized by law enforcement from his previous owners and brought to Harmony for a chance at a better life. But, like many of the equines relinquished to Harmony’s care, Pedro wasn’t immediately comfortable at the haven he would one day grow to love.

Given everything he had been through, it took time for Pedro (then known as Bruiser) to trust people. At the beginning of his four-month stay, he resisted close contact with Harmony’s horse trainers, barn attendants, and volunteers. Being touched was particularly unbearable for him. Each day, Harmony’s highly skilled trainers worked with Pedro to nurture him back to health and create a sense of safety in their shared relationship. They knew that with enough time, patience, and compassion, Pedro would be ready for adoption.

Pedro’s rehabilitation process was slow, but steady. Soon enough, the trust trainers built with him began to pay off. “Once trust is established, I can get the horse [or donkey, in this case] to do anything physically,” said Brent W., trainer and co-manager of Harmony. Indeed, Pedro became more comfortable with having his feet handled, a vital component to caring for his overgrown hooves and preventing any future issues or discomfort. He also gained enough confidence to walk with a halter.

One of the most notable indicators of Pedro’s progress was an unlikely encounter he shared with five children in the League’s Tales for Tails Program, a humane education initiative that pairs new or reluctant readers with an adoptable animal in our care. For many children, reading aloud can be a source of anxiety, leading to difficulties at school and beyond. Practicing in the presence of a non-judgmental animal allows children to take their time and make sense of a story, thereby building confidence and a newfound love for reading. Furthermore, these interactions can provide animals with the socialization critical to successful adoptions. It’s a win-win.

During one Tales for Tails session, Pedro made a breakthrough. The donkey who at first steered clear from human contact now felt comfortable enough to engage. “[Pedro] … wouldn’t let anyone touch him … no adults,” said Sue, a long-time Harmony volunteer. “[When] we had our Tales for Tails Program … five kids put their hands out, and [Pedro] walked up and let every one of them touch him.” Pedro was finally beginning to embrace the love he had always deserved.

Meanwhile, Tammy and Mike Jurich were searching for a creative solution to keep their chickens and other birds safe from predators on their Elizabeth property. After extensive research, they learned that donkeys are often good at detecting coyotes and other predators, given their exceptional hearing and wide range of vision. In fact, with proper care and training, donkeys can serve as guardians for fowl and livestock in much the same way as dogs. The Jurichs were interested in adding a donkey to their family and came to Harmony to meet Pedro.

When the Jurichs first arrived, the trainers at Harmony told them about Pedro’s history, advising that he would need special care given the trauma he had endured. “He was very standoffish during [that] meeting and, at first, we were nervous about adopting,” Tammy recalled. However, after three visits and some careful consideration, they accepted the challenge. Given Pedro’s history of bonding with a horse at his previous home, the Jurichs also adopted a horse (now named Geronimo) from Harmony.

Over the past month, the two equine companions have been getting along beautifully. Pedro also has easily adapted to his new surroundings, which include chickens, ducks, and turkeys. “He loves to lay down with the chickens and ducks,” said Tammy. In fact, Pedro “has blossomed into such a social creature” during his short time with the Jurich family that he has even earned a reputation as a “total lovebug.” Tammy reports that he longs to be brushed for hours at a time and actively seeks to interact with her, Mike, and their 12-year-old son, Anthony. “[Pedro] will walk right up to [us] and start braying as soon as [we] come outside, almost as if to say hello,” said Tammy. Much like the children who connected with Pedro during Harmony’s Tales for Tails Program, Anthony has formed a genuine friendship with his new donkey. Each day, he eagerly waits to feed, groom, and love on Pedro. He even plans to carry on the storytime tradition by reading aloud to Pedro and Geronimo. “Our lives wouldn’t be the same without him,” said Tammy, reflecting on the rewarding progress Pedro has made since joining the family. “It makes my heart happy [knowing] that we were able to bring him in and have him enjoy our touch so much. Before, he was afraid of humans, and now he actually really enjoys [interacting with people],” she said. “It warms my heart that we’re able to do that for an animal – [to] give him a good home and show him the power of touch – that he’ll be taken care of and loved.”

Please help the Dumb Friends League continue to touch the lives of animals like Pedro by supporting our mission to end pet homelessness and animal suffering today.