Marley hears with his heart 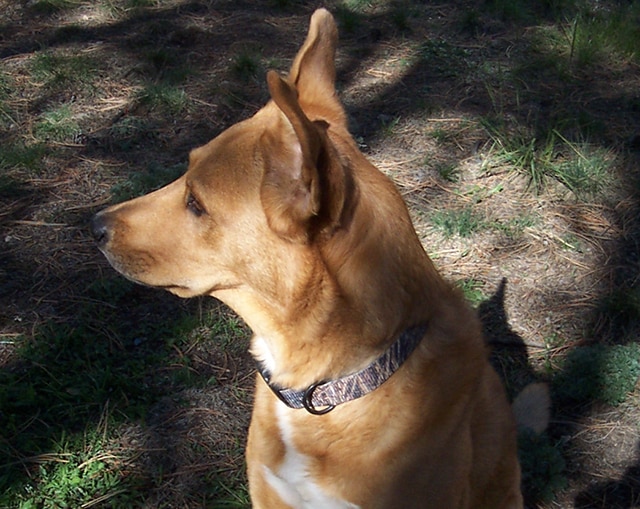 “Marley is a standard American brown dog (a.k.a. a mutt!),” joked his mom, Jeri, and she wouldn’t have it any other way!

Jeri and her husband, Guy, adopted Marley in 2011. Marley’s previous owners abused him until he was injured and terrified. “We already had two other dogs at the time, so what was one more,” said Jeri. “He was just sweet and timid and unjustly accused of killing a kitten. Marley was completely housebroken and leash trained when we adopted him, and he got along fine with the other pets.”

Marley is now 11 ½ years old, and about a year ago, his hearing got more and more “selective,” as Jeri explained. He stopped responding to the doorbell ringing or greetings from the couple when they returned home, which was peculiar given that he used to be quite vocal when the doorbell rang—even when a bell rang on television.

Today, Marley seems only to hear a clicking noise Jeri makes with her tongue, but when he hears it, he responds. “I pat the side of my leg to tell Marley to come and point if I want him to go a certain direction,” said Jeri. “He always gets a small treat/reward when he ‘comes’ using the hand signal, but I RARELY let him off leash—it’s just too dangerous if he can’t hear.”

Marley is less of a toy player and more of a walker and people pup. “Marley just loves to be with us and going for walks and loves to ‘meet and greet’ other dogs,” said Jeri. “He’s VERY friendly to people and animals we meet on our walks. Last year we covered over 1,500 miles, mostly on the Highline Canal where we used to live. Now that he’s 11 ½, he likes shorter walks, but still likes walking!”

Jeri believes that Marley’s eyesight and sense of smell more than make up for his hearing loss, but she is extra diligent when she lets him out in their yard. “We have lots of deer in our neighborhood, and as soon as Marley sees or smells them, he barks his head off,” said Jeri. “If I don’t have him on a leash, I’m in big trouble.”

In addition to being Marley’s humans and giving love to all of their pets, Jeri and Guy and members of the Dumb Friends League Friendship Circle. Their continued support helps the animals in our care until they make a house a home. “We have enjoyed the companionship of seven dogs and four cats throughout our 47 years of marriage,” said Jeri. “They have all enriched our lives immeasurably, and supporting the League just feels like an important way to honor these faithful companions. We wish MORE people would support the League. It’s not like the animals can ASK for the help they need! We’ve seen the League ‘grow up’ and know our donations are going to a great cause.”

Karma finds her one and only